The Dongzhai tea garden (agriculture, preprocessing and final processing) and the operator company Pu’er Zuxiang (management) is located in the Wuliang mountains, near the town of Pu’er, in the province of Yunnan, far south of China. 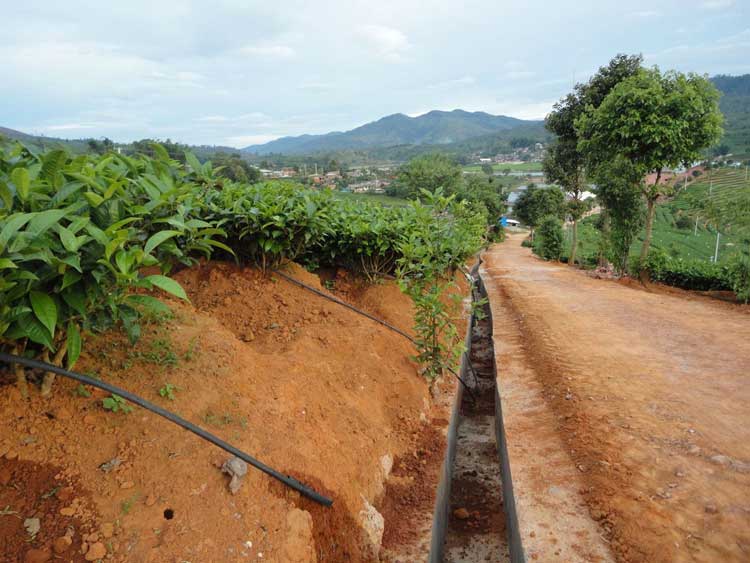 The organic tea cultivation area is located at a height of about 1500 meters in the municipality of Zhengwan. The municipality includes the three villages of Dongzhai, Wanzhangshan and Maweishan, where additional ecological tea growing areas are developed. The development of the tea growing areas requires extensive capital investment, as an elaborate irrigation system for the tea cultivation in this hot region is necessary for the tea plants. With dammed rivers, huge water tanks and piping systems, a wide-ranging irrigation system was built, which supplies the tea growing areas with water.

In the vicinity of the Dongzhai tea garden (Dongzhai means village of the Dongs), there are no industrial companies that could cause a risk of contamination for the organic tea growing areas.

Until the 1990s, the tea growing areas were a forest. The area that the family Dong has nowadays rented in the long term from the state has been partially cleared and the wood has been sold. The family invested the revenues in the organic cultivation.

Private land ownership is not possible in China. The land belongs to the Chinese state. Since 2003, forest areas in China are under protection and shall be no longer cleared. In order to ensure the protection of the forest in this area, the state has leased the land for an unlimited time and for little money to the Dong family.

Within the organic tea growing areas, there are about 50 households (4 to 5 family members per household in average). The Dong family belongs to the ethnic minority of the Dai. In Yunnan Province, 38 percent of the population are ethnic minorities. 62 percent of the population are Han Chinese. Throughout China, there are 56 different ethnic groups. In Yunnan Province alone, 26 different ethnic groups are represented. 15 of them live in the proximity of the town of Pu’er and on both sides of the borders between China, Vietnam, Laos and Myanmar. 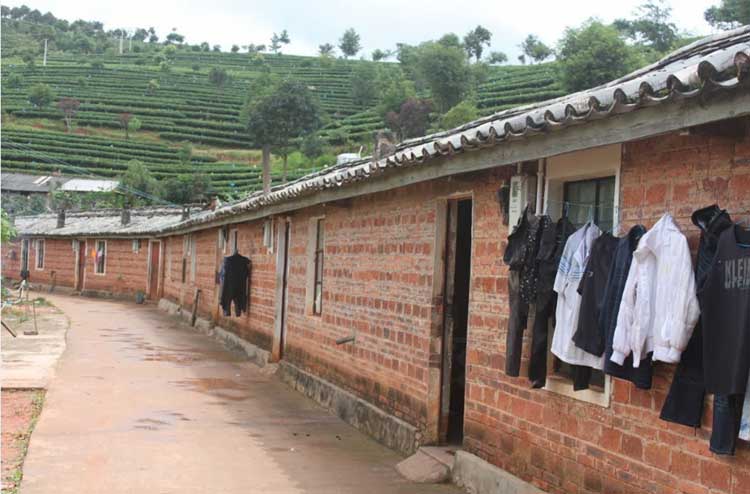 The local farmers in the Dongzhai tea garden live mainly from the organic tea cultivation. In addition, they hold pigs and chickens and grow vegetables mainly for self-sufficiency. Some work in a permanent position in a tea factory or in the tea garden management. 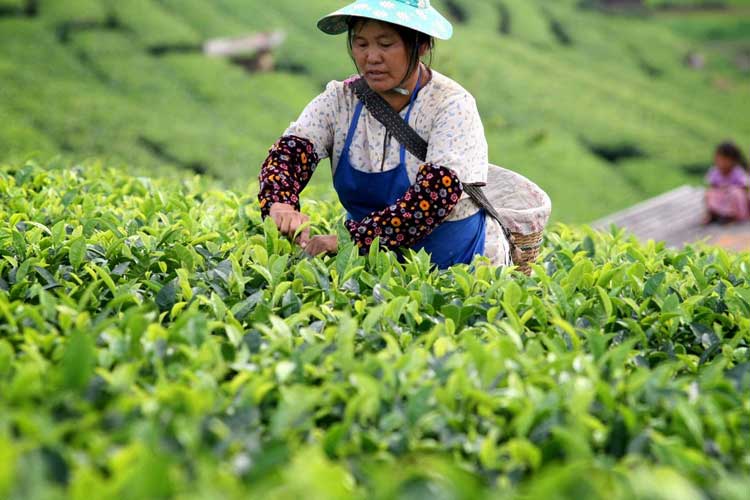 Depending on the demand, the further processing in the tea factory decides on whether the tea is processed to green tea, white tea, yellow tea, black tea or Pu Erh tea, how the tea leaves are formed and in case of Pu Erh tea, also how the tea is pressed. The shaping of the tealeaves into different teas is a handicraft art and in China, a nicely shaped tea is understood as a piece of art and paid accordingly. Therefore, in China not only the taste and the production costs are decisive for the price of a tea. 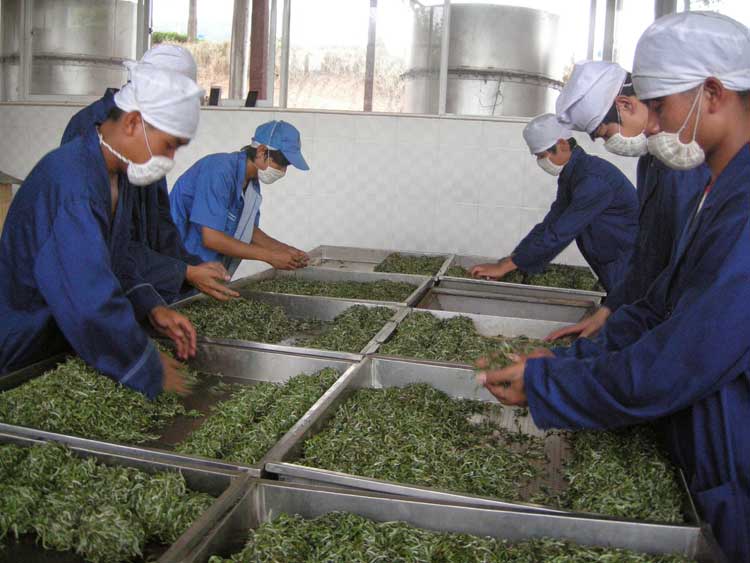 The shaping of the teas is mainly done by hand or, depending on the tea, also in semi-automatic ways.

During one season, depending on the climate and the plucking method, approximately 149 tons of fresh tealeaves can be harvested in the whole organic tea growing areas of Dongzhai tea garden. That is about 39 tons of finished dried tea, which is only about 230 kilograms on average per hectare. For the sake of comparison: with optimal climatic conditions, good soil conditions and machine plucking, up to 3000 kilograms of finished dried teas per hectare can be harvested in other tea gardens of the world. The quality of the tea suffers from this great yield.

The production of the Dongzhai tea garden will increase in the coming years, as the amount of harvest of the newly planted area in Maweishan is slowly increasing. Until now, the area did not provide any noteworthy amount of tea and therefore it is produced only on request. This tea is sold mainly in the Chinese market and only small quantities in Europe and North America.

Due to the high prices of high-quality, sustainably produced Dongzhai teas, it is not yet possible to give the producer export guarantees for large quantities in Europe. Fairbiotea is trying to promote the sales of these top qualities. This is only possible if European wholesalers, retailers and consumers get more enthusiastic about high-quality tea.

The difference in quality and price between the teas that are common in Europe and the Dongzhai teas is significant. Dongzhai tea can cost six to ten times as much as the usual organic teas in the European market. Nevertheless, the price of Dongzhai tea is reasonable considering the quality, the sustainable benefits and the cost of production. The Dongzhai teas are not too expensive; on the other hand, the mostly low-quality teas in Europe are too cheap. These teas are inexpensive because many producers forgo sustainability and quality for cost reasons and accept that tea farmers live in poverty. The Chinese consumers drink exclusively good tea, mainly from the spring harvest and are willing to spend an average of 15 euros for 100 grams of tea. 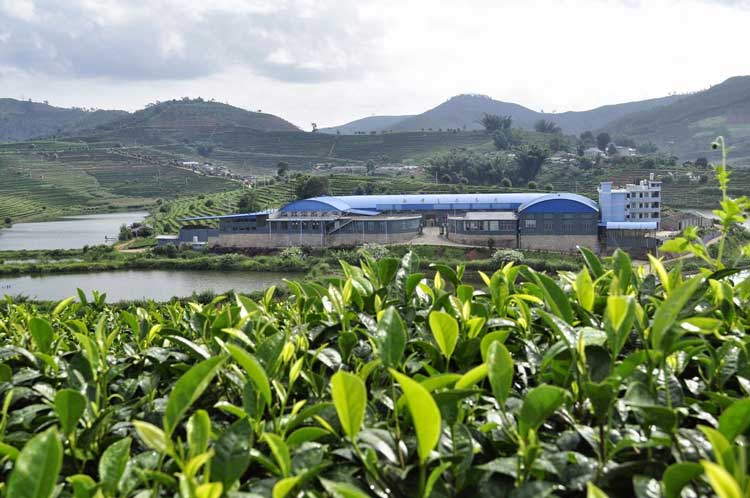 Acting fairly and sustainably means both, for trade and for consumers, to pay appropriately high prices for good and sustainably produced qualities. This is the only way to generate sustainability. Consumer behaviour in Europe is neither sustainable nor quality-conscious.